You Are Here: Team Sonnenwagen visits the IEM 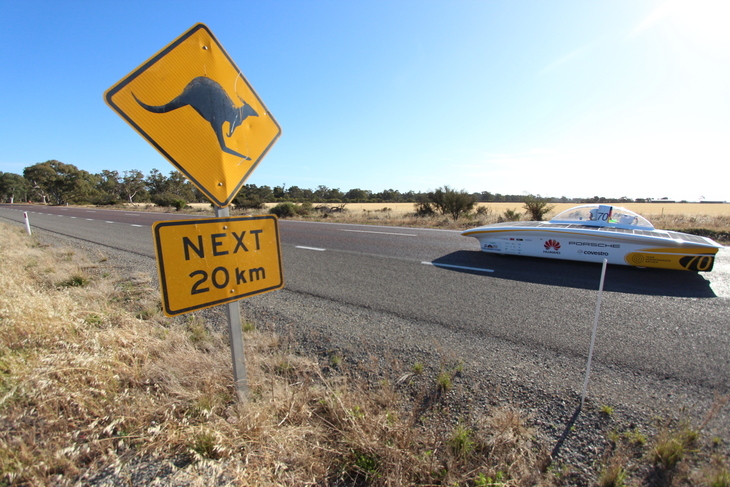 In the last weeks, Students of Team Sonnenwagen Aachen visited the Institute of Electrical machines (IEM) at RWTH Aachen University, to measure the electric motor of their vehicle. Sonnenwagen Aachen e. V. is a student association that works on the development and production of a solar vehicle, with which they attend solar races all around the globe.

After successfully participating in the World Solar Challenge (WSC) 2017, the "toughest solar race in the world", through the Australian Outback from Darwin to Adelaide, Team Sonnenwagen Aachen is currently working on the redevelopment of a solar vehicle, in order to start again at the WSC 2019. However, in order to achieve better results than 2017 and being able to beat 44 teams from other top universities, such as TU Delft, MIT and Stanford, the team still has a long way to go. Driven by the motivation to be part of an outstanding project for sustainable mobility and to create the future due to innovations, approximately 45 students analyze in which areas the next solar car has the greatest potential for improvement. Besides the vehicle aerodynamics, the lightweight body and the chassis, the focus lies one the electrical drivetrain. As an essential component, the design of the electric traction machine takes a high priority in terms of weight and efficiency. In recent months, the IEM has offered Team Sonnenwagen Aachen the opportunity to measure the electric motor from their solar car of 2017 on the test stands. The engine is an ironless, permanent-magnet synchronous machine with axial flow design, which is directly integrated in the wheel and thus is designed as a direct drive. Since the engine is an external rotor with a high diameter, the first major challenge was already the constructive connection between the engine and the load machine of the test rig. The solution was developed by the students in close consultation with the IEM and included, additionally to the engine, two test-bench angles, one for fixing the motor axis and another for guiding the torque-transmitted shaft. The torque itself was carried over the pitch circle of the disk brake of the electric motor using a self-constructed adapter.

The aim of the survey was, on the one hand, to determine efficiencies at various operating points in order to derive a characteristic curve of speed, torque and efficiency. This is essential for developing an efficient and optimal driving strategy for the race in Australia. It also showed that the self-developed engine achieved efficiencies of up to 98%, which is comparable to many electric motors available on the market. On the other hand, it was necessary to identify and quantify power losses of the entire system, for instance coils, inverters and motor. In addition to the electrical losses, especially the power loss resulting from the storage and engine aerodynamics should be considered. It could be shown that the air friction accounts for a significant portion of the total power loss by masking the rotor geometry with a special aero foil and carrying out comparative measurements. The results of the bearing losses have also made it clear that a future design of the bearings should aim low-loss ceramic bearings.

The IEM was delighted to be able to support Team Sonnenwagen Aachen in the measurement of the engine and thus be part of this ambitious project. We hope that the accumulated experiences will help to achieve the goals set in the World Solar Challenge 2019 in Australia: Then it is time for the team from Aachen to succeed, which would mean a victory for sustainable mobility!