After one-and-a-half years of development, the Institute of Electrical Machines (IEM) of the RWTH Aachen University has successfully put the first self-developed SiC-frequency converter into operation at a test bench. The new inverter expands the testing possibilities of the IEM for drives with high speeds and high electrical power. 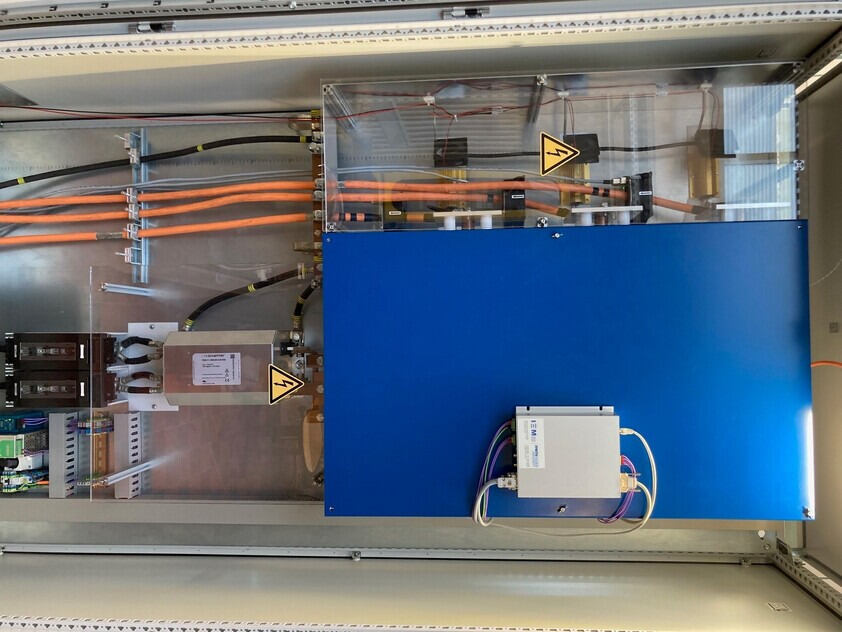 The trend of modern traction drives to higher speeds with increasing electrical power pushes traditional IGBT frequency converters to their limits. In conjunction with the increasing speeds of the drives, the necessary switching frequency of the semiconductors oftentimes increases in order to decrease the harmonic wave content of the currents. To characterize high-speed machines with high power at the test benches, a frequency converter based on Silicon-carbide (SiC) has been developed at the IEM to meet the requirements of modern drivetrains. With an intermediate circuit of up to 800 VDC , a maximum phase current up to 800 ARMS and a switching frequency of up to 30 kHz, this inverter has now successfully been put into operation at the IEM.

The converter with voltage source is built in a two-level topology. For each of the three half-bridges, two SiC-half-bridges from the producer Cree Wolfspeed are operated in parallel. Each half-bridge is water-cooled and its temperature as well as the cooling flow are monitored separately. With the aid of a busbar, designed by the IEM, the intermediate circuit capacitors are connected to the power module with minimal leakage inductance. For the control of the power semiconductor, driver boards were developed and built at the IEM to ensure the synchronous switching. The temperature and current monitoring also take place in these boards. Thus, it is ensured that, in case of failure, the converter switches to a safe operating state. The voltage rise times and the switching frequencies of the semiconductors can be adapted. Thus, the requirements of the electrical machine’s insulation systems can be met. The signal transmission between the driver and a central microprocessor is completely differential. It displays and observes the converter data, as for example the amount of cooling flow, temperature of the semiconductor, and the status of the driver on a web-surface.

Another main aspect of the development was the EMC design of the converter. A DC-intermediate circuit filter, individually connected half bridges with Y-capacitors and a well-thought-out shielding concept, allows for trouble-free test bench measurements. During the design of the housing, it was paid attention to necessary adaptions for specific test bench applications being easily dealt with. Part of this are, among others, double current-sensors. Each half-bridge branch is equipped with two current sensors in order to provide the measurement to the motor controller and to externally connected power analyzers equally. Moreover, LCR-filter can be used at the converter output to reduce possible overvoltage at the motor connections.