You Are Here: Development and Construction of a Highspeed Actuator System and Track for a Maglev Train Model

As part of the master thesis of Clemens Lindner, which was sponsored by the Hans Hermann Voss foundation, a new test bench for maglev technology was built at the IEM. 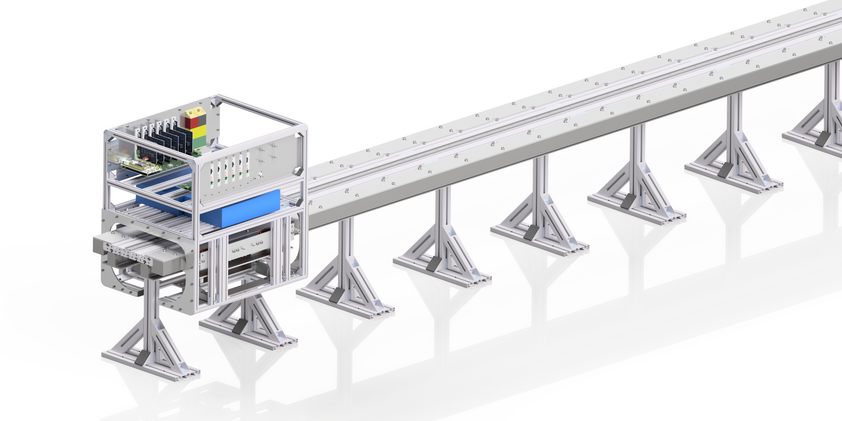 Copyright: © IEM CAD model of the train and track

Various linear motor topologies can be modularly installed and tested in the track, which has a length of eight meters. For this purpose, it is planned to integrate a linear, externally excited synchronous machine on one section and to analyze the combination of different drive concepts.

The magnetic train model is equipped with an incremental magnetically encoded displacement measurement system that can accurately measure positions in the range of several micrometers. In addition, the vehicle is equipped with high-precision eddy current sensors on all four levitation actuators that can measure the distance between actuators and track in the micrometer range. Complex control models can be implemented and analyzed using Matlab Simulink via a central microcontroller with self-developed power and evaluation electronics. Currently, a degree-of-freedom control system is being designed to efficiently levitate the train at a distance of a few millimeters from the rail. The linear asynchronous motor is controlled by another microcontroller using a linear motor control. For comparison with simulations, force sensors are installed in the chassis to measure the thrust and normal forces of the linear motors. The components are powered by two lithium batteries integrated into the vehicle above the motor and actuators.