You Are Here: Successful Completion of the DFG Project – Vector Hysteresis Modeling of Ferromagnetic Materials

Magnetic hysteresis is a topic with great technical and physical significance for the design and dimensioning of electromagnetic components. Although numerous researches have been done on modeling magnetic hysteresis, it remains a challenge to solve the magnetic field problem with full satisfaction. This DFG project (HA 4395/21-1) investigated the vector hysteresis play and stop models and discussed the results of FE simulations of an electromagnetic circuit under local consideration of the hysteresis effects. 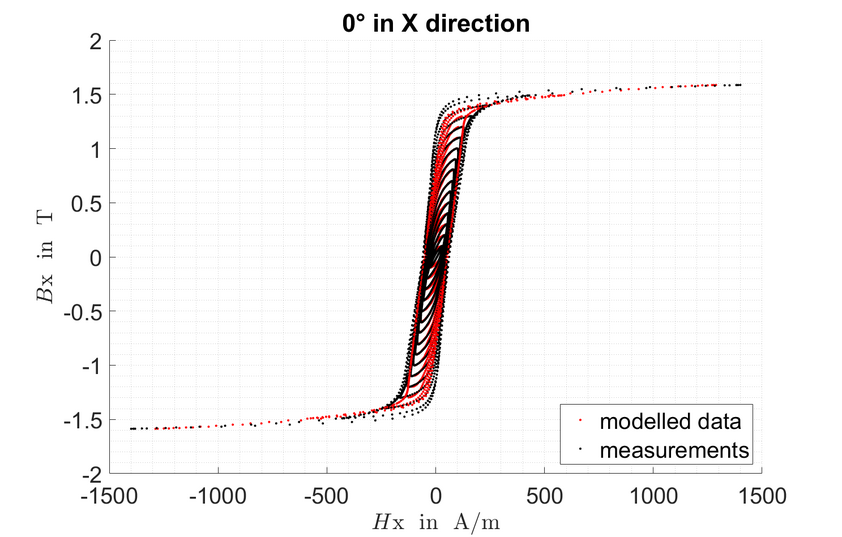 Copyright: © IEM Comparison of the measured data under the magnetization amplitude from 0.1 T to 1.6 T in steps of 0.1 T, with the simulated data obtained by the stop model with 7 hysterons for the electrical steel sheet M330-35 (2.4wt% Si) in the induction direction 0°.

In this DFG transfer project, vector hysteresis models based on the quadratic potential basis functions were built and validated by the IEM. The developed vector hysteresis models were integrated pyMOOSE (IEM in-house FE solver) and the results were validated. The vector play and stop models are based on thermodynamic consistency. They are able to represent the vectorized characteristics of the magnetization processes. With experimental measurements of the vector hysteresis on the Rotating Single Sheet Tester (RSST), the practically relevant ferromagnetic materials were investigated. Quantitative validation of hysteresis modeling with play and stop operators was performed here to gain better insight into the potentials and limitations of these models. The vector stop model is coupled with the weak formulation of the electromagnetic problem to numerically solve electromagnetic field problems. Using Newton's method, the simulation of electromagnetic field problems is efficiently solved using the vector stop model in the vector potential formulation. The positive definite construction of the local models ensures a robust convergence of the Newton iterations. In FE simulations, the vector hysteresis effects observed in the measurements were reproduced locally and the hysteretic field distribution throughout the model was computed numerically.