You Are Here: SEW-EURODRIVE Study Award 2020 for Alexander Kubin

Every year, the SEW-EURODRIVE Foundation honors young scientists with the Ernst Blickle Study Award. The prize is awarded to master and diploma students in the fields of electrical engineering, mechanical engineering and economics. This year, our master student Alexander Kubin was one of the 18 prize winners. 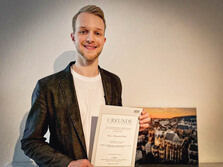 Like every year, the SEW Eurodrive Foundation awarded the Ernst Blickle Study Prize in 2021 to master and diploma students from the fields of electrical engineering, mechanical engineering and economics. Via the professors, diploma students from universities in Germany, Austria and Switzerland were able to submit their work for the study prize, which is endowed with 2,500 euros. After a tribute to the chairman of the foundation, Mr. Rainer Blickle, who passed away in March, and a short commemoration, the study award winners were honored by the board of the SEW-EURODRIVE Foundation on May 7th: Due to Corona, the award ceremony took place as part of an online event. With Alexander Kubin, a master student from the Institute for Electrical Machines is also among the 18 award winners this year. His master thesis is entitled "Modeling and Calculation of Induction Machines for the Solution of Multi-Physical Problems". In this thesis, he deals with the increase in simulation effort on a multi-physical and cross-domain level that accompanies the increasing complexity of electrical drive systems. For the solution of such multi-physical problems in the field of electrical machines, a wide variety of machine models exist whose respective suitability is problem-specific. Using the example of the induction machine, various analytical and numerical models were analyzed and further developed with respect to their value range, level of detail and solution effort. In this context, the scaled harmonic wave model, which enables the modeling of saturation effects in the harmonic wave model, and a scaling approach for the time-harmonic finite element method for the consideration of harmonics in the iron loss calculation were introduced. Based on the analysis of the models, a generic methodology for model selection was described using the induction machine as an example. The machine models were integrated into an optimization environment for the methodical solution of an exemplary multiphysics problem, in which the geometry of the machine is adapted to the specific problem. To achieve good global and local convergence, optimization methods with different properties were combined to exploit synergies as well as an investigation of measures to reduce the solution effort of the optimization environment. Thus, different approaches such as artificial neural networks were described and analyzed.